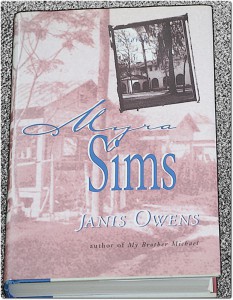 [Editor’s note: Janis Owens spent her younger years in Marianna, Florida, and grew up to write a series of books set in the area. Burton Cox, having spent his younger years in this area of the Florida Panhandle as well, has shared his review of Owens’ work.]

Janis Owens has been ripping up the roads of the Southeast as a devoted army of readers, old salts and new recruits who follow her banner, meet at book-stores and cafes around Dixie to hoedown with one of the contemporary South’s great literary voices. Her latest articulation, “American Ghost”, takes place in the Florida Panhandle, in the strath of the Chipola River, in a town that may feel a bit like towns you’ve known if you grew up in the small-town South, as did Owens, and I. “American Ghost”, 4th in a slew of the most authentic books set in the piney woods down here that you’d ever want to – or dread to – read, is at once archaeology and new construction, exploration and invention; old mounds, new forensics. Like her first three novels, this volume attributes to the human spirit some forces both kingly and common. Nobility may prevail, mostly, but not without a struggle within and without its oh-so-human hosts. The gritty, witty, muscular book has been widely and admiringly reviewed in People, Elle, the New York Times, and by smart readers, such as George Little, on the website Florida Panhandle On-Line. To add to the praise and insights attending “American Ghost” would only be redundant or plagiaristic, or both. But I would like to step back and survey the ground Ms. Owens covered in her first three novels: “My Bother Michael; Myra Sims; The Schooling of Claybird Catts.” That is some formidable topography.

Taken together, the three books tell broadly of the blending, first by chance, then by marriage, then against all odds, of two families, the Sims and Catts in a small town not unlike Marianna, Florida, Owens’s birthplace, and mine. Specifically, they identify the trials and triumphs of four primary characters in the two families, with a great deal of overlap, which is not to say repetition. A “Rashomon” comparison doesn’t fit here because the facts of the trilogy are never in dispute; it’s more fitting to say that it’s a kind of gospel, except with three first-hand witnesses – indeed, participants – telling the story as it felt to them in its unfolding time. Unlike in the Gospel books of the Holy Bible, a fourth writer doesn’t appear; instead a fourth character who never speaks to us directly is the impetus for the others’ stories. For the love of Michael, they all spill their beings. At first an animating force, then a grey eminence who drives the three narratives, Michael Catts is brother, husband, and father to the scribes who tell their tales of individual and familial ecstasy, agony and, finally, acceptance.

Michael Catts is at the center of this family of books, as he is at the center of the Catts family; as vigorous, athletic oldest brother, hard-working, decisive and successful bootstrap businessman, rock-solid citizen. His virtues are numerous, yet not the kind to excite envy or resentment. He is a truly lovable man with just the right touch of pride and humility; a brother to be cherished, a father to be admired, a husband to be appreciated to the depths of a young wife’s soul. Yet these predictors of good fortune do not take into account the lasting power of first love, or the lingering effects of violent abuse of the girl child who will become Michael’s wife, and one of contemporary Southern literature’s most fascinating characters, Myra Sims.

Michael is at the center of the Catts/Sims mandala, but Myra Sims is the lowly creature who ascends in the myth, becoming not a goddess but a fully-formed and totally healed woman. Which is goddess enough for me. I love this magnificent character. Though the wheel spins around Michael, I think Myra is the true center of the universe created by Ms. Owens, a woman of considerable powers herself.

After reading “My Brother Michael, Pat Conroy wrote: “Why isn’t Janis Owens the most famous author in America?” Good question, Mr Conroy. With equal force “Myra Sims” took my mental and emotional breath away, and left me physically agasp. Then I wanted to hug Claybird Catts and assure him everything would be alright, ‘cause a lot of people loved him. I’ll bet you’ll love him, too. This is powerful stuff Ms. Owens serves, but I couldn’t just sip it. I chugged it right on down. I read “Myra Sims” twice, back to back. I haven’t done that since I began to read “Huckleberry Finn” more than half a century ago. That is the kind of company in which Myra should travel.

In the foreword to “The Adventures of Huckleberry Finn”, Mark Twain informs us that he will be writing in four different dialects. Owens gives us no such warning, but with a slyness equal to Twain’s she acquaints the reader with a voice not much heard before, except on Magnolia Hill or a few leftover Cracker ghettoes like it. The accent, common in archival Florida but rare as snow these days, is a hard one. Even with a soft heart behind it, a sound like “thet” (for “that”), spat out in the pocketknife jab of the quick-tongued piney-woods Floridian sounds harsh, and the Cracker tongue delivers more shades of meaning to phrases like “ I ain’t studyin’ you”, than Jethro Bodine can cipher, from stomach ache funny to throat cut mean. Neither barn burners nor aristocrats, the working folk of Magnolia Hill are atavists of a hidden, dissolving breed, holed up where a dead-end is not called a cul-de-sac, in look-alike cottages that belong to someone else; serfs, peasants, wage-slaves, proud as knights, poor as monks, nearly extinct. Where they live has been described before:

“There’s a lonesome old town there that’s oft-times remembered
So often in fact that the memories are worn.”
From the song “Paradise”, by John Prine, 1971

It’s to this poor enclave made respectable by unceasing effort that Leldon Cantril Sims, handsome, daring and doomed by irredeemable flaws moves his reclaimed family; Myra,9, her brother Ira, 11, and their mother, Eloise, in the summer of 1959. There, for the baffled little girl so silent she is sometimes taken for deaf and mute, a girl inchoate, life truly begins. And, except for the loving goodness of the family next door, life is hell.

After my second reading of “Myra Sims”, I scanned back through the pages, annotating that which I would quote, chapter and verse, taking a cue from that Gospel metaphor in the back of my mind, in the fervor of the convert. But my Sunday school training got (literally) the better of me, and in obedience to the 8th Commandment I decided against stealing the pleasure of discovery from other readers who may stop here first. But this much I will say: Myra tells you what she’s going tell you before the end of Chapter 2. Then she sets about in earnest to tell you the truth. I assume all authors mean to tell the truth when they set out upon a writing, but this character is determined to tell what the piney woods folks I grew up with would call the “honest truth”, as in “I’m ‘aw tail yew the honest truth, now, yew heah me?” Though the accent of some of the most lovable characters is harsh, and other players are simply plainspoken, the language of the novel(s) is beautiful and true. Myra speaks the truth, even about her owned sins. This is a character uncomfortable in her body and mind, but at ease with the truth and compelled to tell it.

Enduring brutality, incestuous rape, her mother’s emotional abandonment, and resultant mental illness, Myra survives. Wearing a threadbare heart and a shabby spirit, but somehow not defeated, the girl with too much experience to be called innocent and too little to be called wise, starts a blundering search for…what? She tells us at certain point that what she prefers above all else is understanding. What she wants least of all is pity, and indeed, she never asks for it. Understanding is a state into which Myra earns her way, but like St. Francis, she seeks ultimately not to be understood, but to understand. If you will concede that there are worlds within us, Myra may be on a journey from the home she is born into, to the spiritual home all must discover, on a kind of inner-galactic Pentecostal Buddhist search, arriving at a frantic Dixie nirvana, just outside her hometown, somewhere in the vicinity of Peace.

Clearly, Myra’s story won my heart. In spots it went through my funny bone to get there – she becomes mordantly, sarcastically funny, just after the power of anger returns her a giant step toward sanity – other times the “ping” passed through my mind. There is as much to stimulate the mind as to tickle the wit. Myra has educated herself through cast-off books and her quick study in the art of psychology, the lingo and frankness of which she rapidly absorbs from her would-be healers. Ultimately the remarkable woman heals herself, and extends her healing hand to those who need it, in a perfect circle, back to the innocence from which she began.

I hope Mr. Conroy’s question becomes obsolete, but if it doesn’t – if Janis Owens doesn’t become the most famous author in the United States- she will remain important because in her 4 novels (and even in her cookbook!) she did what so many try to do and cannot quite: She told us the honest truth, and beautifully.